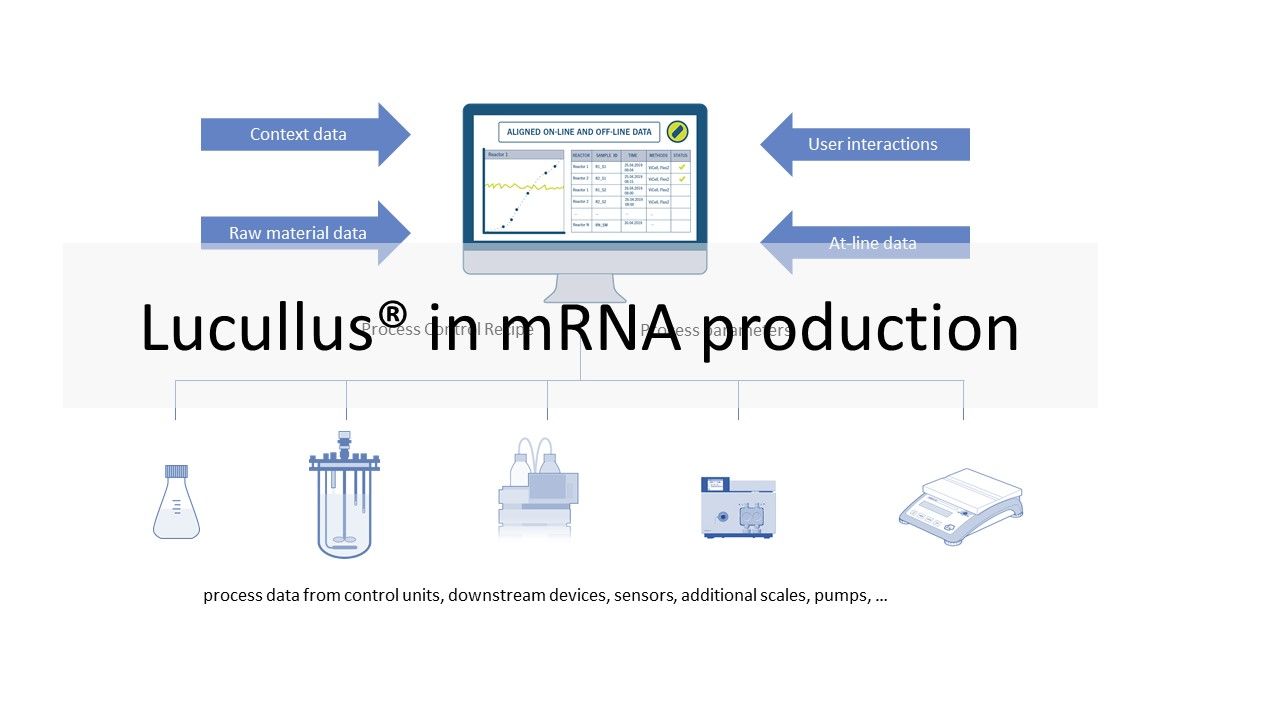 Vaccines based on messenger RNA (mRNA) gained awareness during the COVID-19 pandemic. This novel alternative to conventional vaccines is emerging for several reasons: on the one hand, mRNA vaccines only encode one specific antigen, have a short controllable in vivo half-life, are non-insertional and non-infectious, and therefore extremely safe to use[1]. On the other hand, mRNA manufacturing is rapid and easily scalable with a high productivity compared to cell-based manufacturing of biopharmaceuticals. The production of mRNA vaccines consists of a series of process steps, from production in the bioreactor, subsequent purification in several steps, and formulation. However, mRNA therapies are a new technology, the platform is evolving, and process parameters are rapidly changing[2]. Lucullus® process information management software is the ideal solution for monitoring process parameters, recording process data in a central database, as well as process control across all steps in the mRNA manufacturing process – in both upstream and downstream - from the development lab to production. The device agnostic and modular architecture of Lucullus® provides the necessary flexibility to integrate equipment from different manufacturers and with different data interfaces. Adaptations of process flows, automation and remote control of experiments, recipe management as well as media and sample management can be realized GMP compliant and to the customer's needs with a single software.

Messenger RNA vaccines are based on a similar principle, but instead of inactivated viruses or viral proteins, mRNAs are introduced into the body with the instructions to produce viral antigens. To efficiently deliver mRNA molecules into the cytosol, mRNA delivery systems, which include viral delivery systems, lipid-based carriers, (cationic) polymers and peptides, are used[3]. Delivery of an mRNA into the cytosol of a cell potentially triggers production of a target protein that can function as a therapeutic or prophylactic, act as an antigen to trigger an immune response for vaccination purposes, replace a defective protein, or trigger an antitumor response. Therefore, mRNA vaccines also have the potential to protect against other infections and treat a great range of diseases including cancer, HIV, influenza, and even genetic disorders[4]. 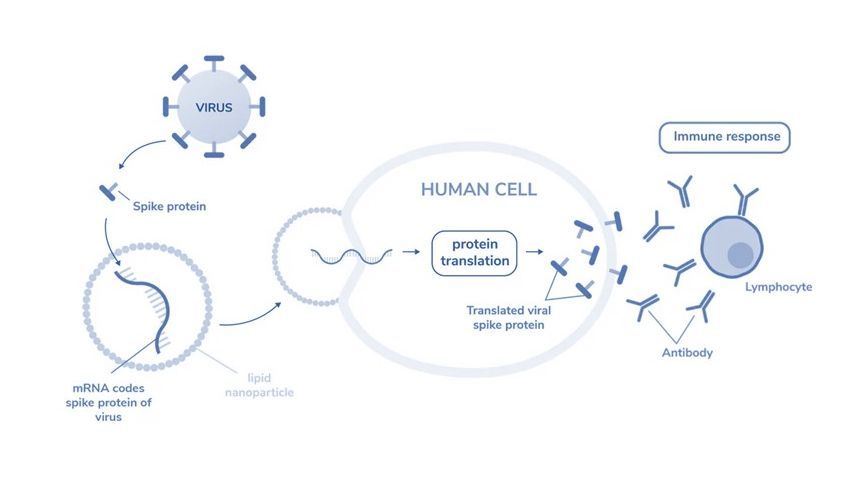 In comparison to other delivery systems, viral delivery systems such as adeno-associated viruses (AAV) are well established and approved as vectors for vaccines and gene therapies. Viral delivery systems can lead to immunogenicity and more frequent systemic side effects[5]. In addition, the manufacturing process is far more complex and high titers are required for gene therapy applications. In contrast, simple and robust production-scale platforms can be created for mRNA production processes. Companies can design mRNA vaccines relatively quickly once they know the genetic sequence of the pathogen and can thus focus on process development. COVID-19 vaccines are likely just the beginning of the mRNA revolution. The increasing demand for mRNA vaccines requires a technology platform and a cost-effective manufacturing process with well-defined product characterization.

Large-scale production of mRNA vaccines consists of a one- or two-step in vitro reaction followed by purification with multiple steps that may include DNase digestion, precipitation, chromatography, or tangential flow filtration.

Production of a pDNA Template

Linearization is required to avoid transcription events that can generate undesired forms of mRNAs. It is achieved by mixing the plasmid DNA with a restriction enzyme in a reaction buffer[1]. Impurities such as the restriction enzyme, BSA, DNA fragments, endotoxins and others are then removed by tangential flow filtration (TFF) or chromatography.

The next step is in vitro transcription, in which linearized pDNA, which serves as the DNA template, is transcribed into mRNA. This enzymatic reaction uses elements of the natural transcription process, including RNA polymerase and nucleotide triphosphates. After transcription, the final mRNA structure requires a 5' cap structure to be stable and efficiently translated in the cell[4].

After the in vitro transcription step, the mRNA is purified from the impurities and materials, including endotoxins, immunogenic double-stranded RNA (dsRNA), DNA template residues, RNA polymerase and elemental impurities. Several options are available for mRNA purification, such as TFF or chromatography steps, including reversed-phase ion pair, anion exchange, and affinity chromatography with poly(dT) separation[5].

Following purification, final concentration and diafiltration is performed to maximize product purity and transfer the mRNA to the appropriate buffer for formulation or storage.

Delivery tools are equally important in the effectiveness of mRNA vaccines and therapeutics. Lipid nanoparticles (LNP) are most commonly used for mRNA delivery. Each lipid nanoparticle is composed of four different lipids that allow the mRNA to be transported within and protected from degradation. These lipids are also responsible for the efficient release of RNA into the cytoplasm. The structure of the cationic lipids has a great influence on the activity of LNP, its toxicity and biodistribution, which in turn affects the potential toxic effects in the body[6]. To obtain reproducible results with the final formulation, a consistent quality of the lipids is required, which depends on the quality of the raw materials used for the synthesis of the lipids and the corresponding material properties of the lipid itself.

The purified mRNA can be formulated into the delivery particle using a variety of techniques. In the common solvent injection technique, the lipids are dissolved in a solvent such as ethanol and rapidly mixed in a low pH aqueous buffer containing the mRNA. The low pH buffer is then diafiltrated into a neutral buffer, concentrating the particles by ultrafiltration[5].

Process monitoring and control with Lucullus®

Different equipment is used for the individual process steps described above. This ranges from simple sensors, scales and pumps to bioreactor control and chromatography systems. This equipment typically comes from different manufacturers. Different models of equipment increase the complexity of an installation. The goal of many manufacturers is to collect data from all equipment in each process step and store it in a single database for monitoring and review. In certain operating units (e.g., USP bioreactor, LNP formulation), manufacturers also want to automate and remotely control the processes. Since the software is operated in a GMP environment, it must be validated. So the manufacturer has to perform the necessary IQ/OQ tests and provide the required documentation. The Lucullus® Process Information Management System (Securecell AG, Switzerland), the first version of which was released in 1995, is a sophisticated and comprehensive central data hub for bioprocess management and control. Lucullus® provides an overarching, flexible and scientist-friendly SCADA functionality. It is designed as a centralized data acquisition, monitoring and control platform for upstream and downstream development to harmonize activities with an interaction and control level above individual devices. 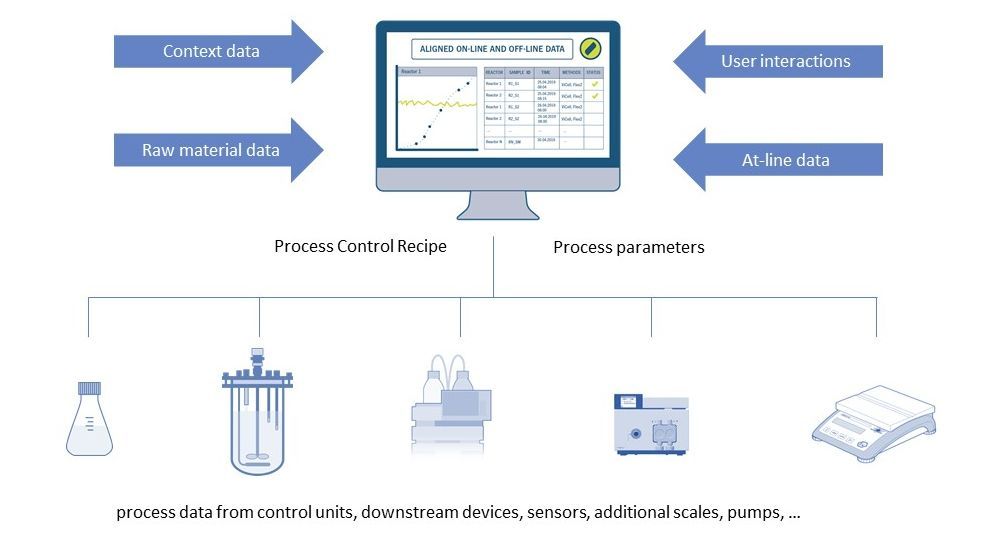 Lucullus' device-independent and modular architecture provides the flexibility to integrate equipment from different manufacturers and with different data interfaces, and to perform all process automation tasks. Online equipment data (from the process units) is merged with sample-based results from at- or off-line analytics and can also be used for process control. Built-in media management enables digitization of media kitchen activities (buffers, feeding, bulk media) while providing a clean workflow for linking media preparation records to process units to provide traceability of raw material and process results. In combination with Securecells’ PAT system Numera®, Lucullus® covers all sample planning, sample triggering and processing of online and offline data from all analytical instruments. Securecell offers with Lucullus® a powerful and versatile solution to supports customers in the field of mRNA product development and production with the latest technologies in digitalization of bioprocessing.