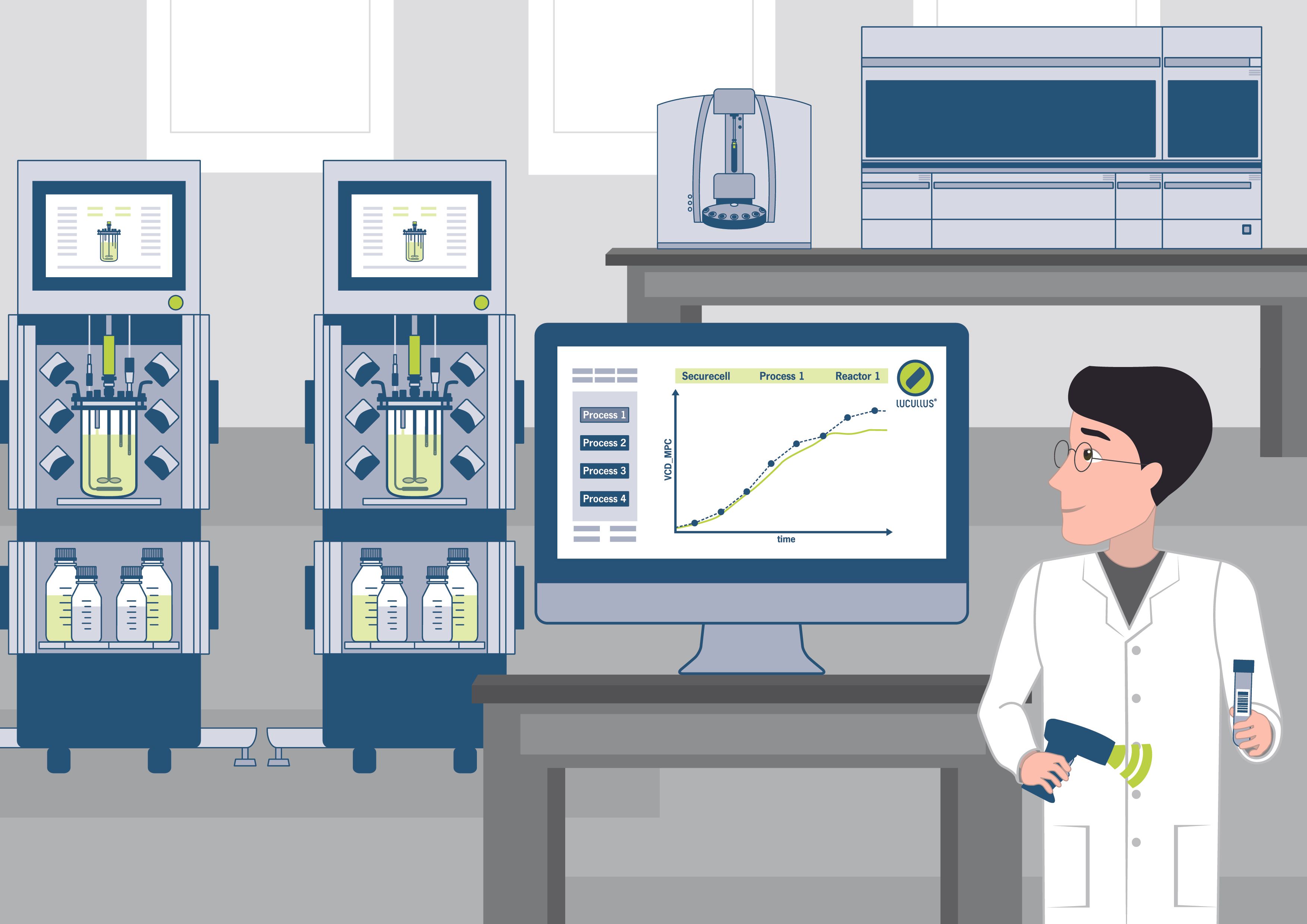 Bioprocess laboratories with multiple lab-scale bioreactors often execute cultivation experiments in parallel with varying process parameters for process development and optimization purposes. A challenge in bioprocess development is the integration and automation of all process equipment and analytical instruments to minimize operator interaction, operator-to-operator variation, and process disturbance for optimal process comparability.

In biopharmaceutical drug production, there are multiple manufacturing control variables that are considered critical process parameters (CPP). These parameters are optimized during process development and implemented in manufacturing to keep product quality within deﬁned and acceptable limits. Many critical quality attributes (CQA) depend on complex intracellular biochemical equilibriums that are naturally modulated in response to in vitro environmental conditions within the bioreactor vessel. One such condition is the availability of an energy source (e.g., glucose) in the medium used for mammalian cell cultivation. The optimization of glucose concentration and feed dynamics for speciﬁc production cell lines is required for high-performance fed-batch bioreactor cultures and desired product quality.

Using in-line sensors for near-infrared (NIR) and dielectric impedance spectroscopy, the BR1000 bioreactor system (Figure 1) monitors three critical process parameters i.e., glucose, lactate, and VCD in real-time. When employing a custom calibration model, the BR1000 model predictive control (MPC) algorithms are designed to automate the supplemental feeding of glucose to maintain a precise setpoint value concentration. Pertinent to this report, the glucose concentration can also be dynamically controlled at any point during the cell culture timeline.

Lucullus® is a powerful software for enterprise-wide bioprocess control and data management. It allows the integration of various bioprocess technology equipment, such as bioreactors, probes, or analytical devices, and further allows process monitoring and control based on the exchanged data. Every step along a typical bioprocess, from design, preparation, execution, and evaluation, is supported by Lucullus®, resulting in a single software solution to manage all data of integrated bioprocesses.

On a standard English Windows-based laboratory personal computer (PC) in the Yokogawa cell culture laboratory, a licensed copy of Lucullus® was installed. The PC was connected via ethernet cable to a network hub that was further connected to each of the three BR1000 bioreactors (LP6, LP7, and PP4), the Roche Cedex® Bio Analyzer, the Beckman Vi-CELL XR™, and a laboratory label printer (Figure 2). Through a bidirectional connection to the bioreactor systems, Lucullus® was able to perform both, the necessary control actions and data collection.

Prior to daily sample collection from the bioreactors, barcoded labels were printed and attached to culture tubes. The culture tubes then were used for sample transfer from the reactors to the off-line analytical instruments. Based on the barcode, printed on the sample labels, a reference identiﬁcation between the off-line measurement results and the process and process time was created. This workflow allows the integration of all the off-line data from the off-line analytical instruments in Lucullus®. Thus, the off-line measurements were readily available, with a short time delay, for comparison against and validation of the estimated process values based on the model predictive control algorithms.

The data of the BR1000 reactor measurements and prediction models, Beckman Vi-CELL™ XR measurements, and Roche Cedex® Bio Analyzer measurements were automatically collected in Lucullus®, hence no additional middleware was required for transporting the analytical results.

A clonal IgG expression CHO cell line (K1SP) was obtained from an external source. Cultivation was performed in FUJIFILM Irvine Scientiﬁc CHO cell medium with a starting concentration of 3 g/L of supplemented glucose for all bioreactor runs. Stirred-tank glass vessel designs were employed with a starting volume of 1500 mL and seeded at 150,000 cells/mL with the same seed stock. Standard pH, temperature, gases, and agitation were controlled at previously optimized values and automatically monitored and controlled by the BR1000 bioreactor system. Culture growth was allowed to proceed in parallel for 14 days.

Bioreactor PP4 was the experimental control with a steady-state concentration of glucose maintained at 3 g/L throughout the entire cultivation timeline. The glucose shift in the other two bioreactors, when the cultures reached a VCD of 16 million cells/mL, was automatically controlled and executed based on a custom programmed process control operation by Lucullus®. Bioreactor LP6 was shifted up to 5 g/L and bioreactor LP7 was shifted down to 1 g/L glucose (Figure 3). The employed feed solution was FUJIFILM Irvine Scientiﬁc CHO cell medium supplemented with 28 g/L glucose.

Immediately after setup and daily thereafter, a 10 mL sample of the bioreactor culture suspension was extracted for off-line analytical testing. 1 mL sample was mixed with a staining reagent according to the protocol and analyzed with the Beckman Vi-CELL™ XR to determine total cell count and VCD. The other portion was centrifuged to pellet cells and a portion of the supernatant was analyzed with the Roche Cedex® Bio Analyzer for glucose, lactate, and IgG concentration. The remaining sample was placed in storage at -20 °C (-4 °F) for possible future characterization of the secreted antibody product.

Across the three bioreactors, cell growth was comparable with a peak VCD of around 20 million cells/mL on about the eight day of cultivation (Figure 4). Due to the different setpoints of glucose concentration, the feed volume varied, resulting in signiﬁcant differences in the ﬁnal culture volume. The final culture volume of the LP6 bioreactor with a glucose setpoint of 5 g/L was over 2.3 times higher than the starting volume. The final culture volume of the other two bioreactors was progressively lower consistent with the glucose concentration setpoint (Figure 5). 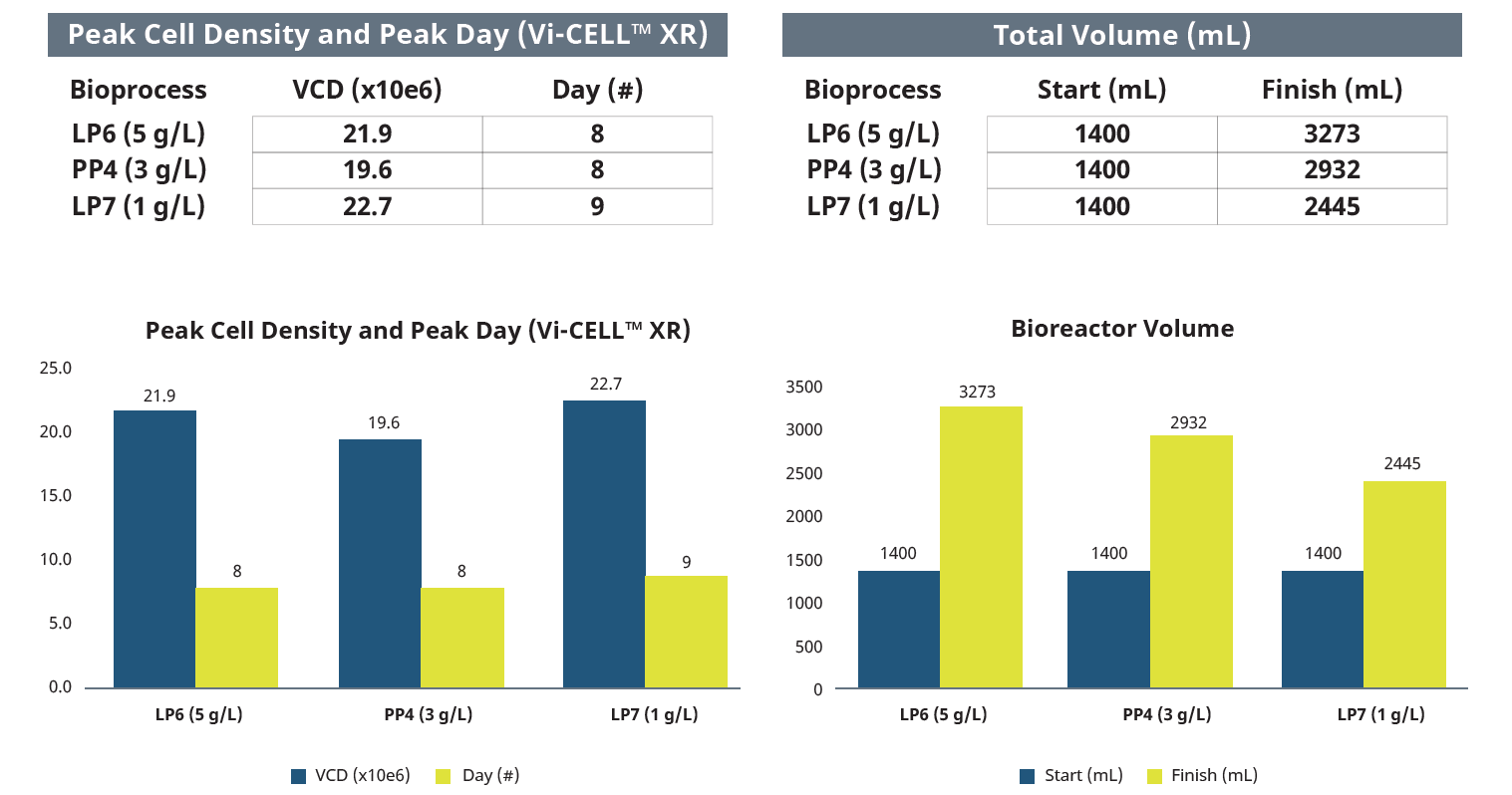 Figure 5: Peak cell densities and ﬁnal culture volumes are indicated for each bioreactor.

Comparison of Estimated and Off-Line Parameters

Across the three bioreactors, the glucose and lactate concentration, and the VCD were measured with off-line analysis (Roche Cedex® Bio Analyzer, Beckman Vi-CELL™ XR) and estimated based on the BR1000 integrated MPC (Figure 6). 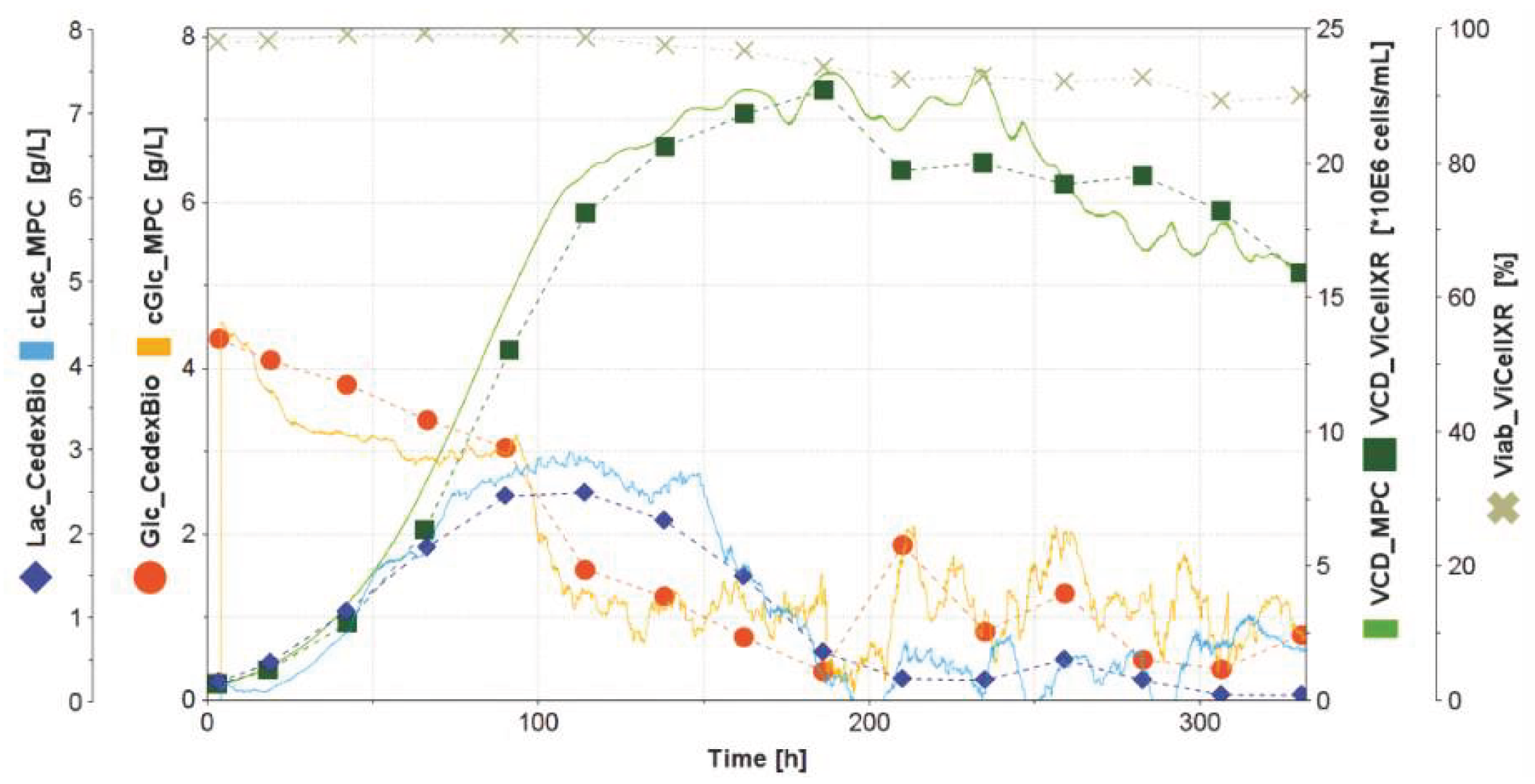 Figure 6: An overlay of the at-line reference measurements and corresponding estimations with the MPC algorithm shows agreement between the signals (exemplarily shown are data from the LP7 bioreactor).

Under ideal circumstances, the off-line measured and BR1000 MPC-estimated data sets are in close alignment. Generally, the off-line data is considered the true “reference data,” as the assays have been used extensively for years throughout the industry and display high reliability. Control of the bioreactor, however, is managed using the soft-sensor MPC data derived from the BR1000 in-line sensor systems. To determine the degree of similarity between the MPC data and the reference data, the values were compared using the root mean squared error of prediction (RMSEP) statistic (Figure 7). To calculate RMSEP, a custom script (LCALC script) was programmed in Lucullus® according to the formula in Figure 7.

Figure 7: The formula used to characterize the alignment of MPC data with off-line analytical assay results.

The script provided a continuous update of the underlying statistical calculation and a ﬁnal single value for each of the soft-sensor parameters for all bioreactors (Figure 8). A perfectly aligned comparison between off-line and estimated values would have a theoretical value of 0.000. The RMSEP values for glucose and lactate ranged from 0.320, representing the closest observed alignment (LP7, Lactate), to 0.800, representing the poorest aligned case (PP4, Lactate). RMSEP values for VCD over the whole process ranged from 1.534 (LP7) to 5.342 (PP4). The alignment of the off-line and estimated VCD values was more accurate in the exponential growth phase than in the stationary and early dead phase. Overall, off-line measured and MPC estimated glucose, lactate and VCD values are comparable (Figure 6 and 8). 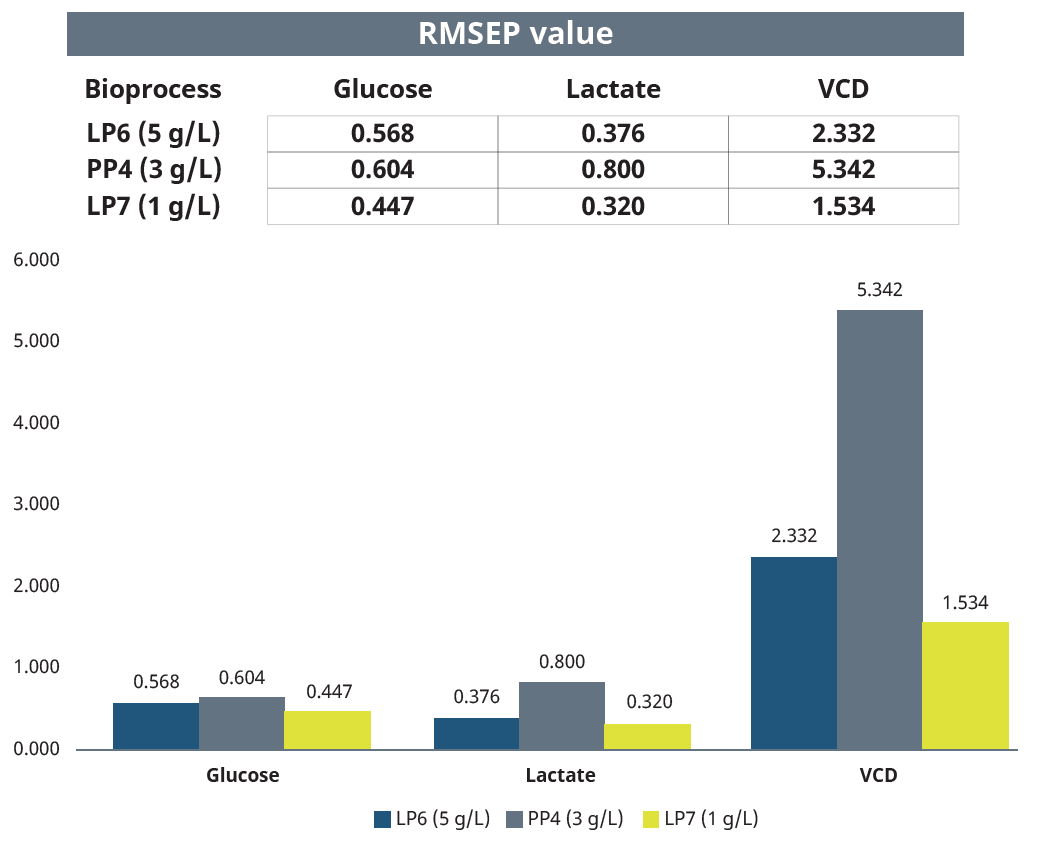 Along with the other critical culture parameters, the concentration of IgG antibody produced was assessed daily using the Roche Cedex® Bio Analyzer. The IgG antibody concentrations varied only slightly between the three cultures (Figure 9). However, the final culture volumes varied significantly, and as a consequence, the total yields differ, with the lowest total yield for the LP7 (1 mg/L glucose) and the highest total yield for the LP6 (5 mg/L glucose) bioreactor culture. 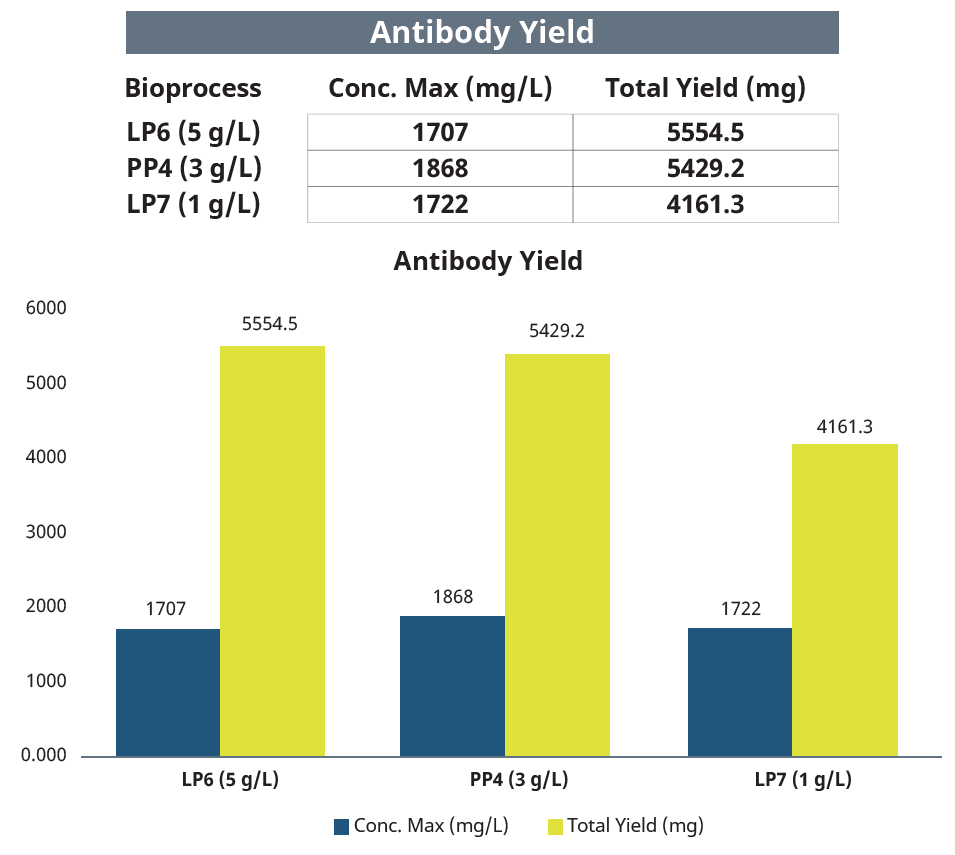 Figure 9: Antibody concentrations were determined by the Roche Cedex Bio Analyzer with an IgG-speciﬁc immunoreagent assay. Results are shown for the ﬁnal day (Day 14).

The conducted experiment was programmed to trigger a dynamic glucose concentration shift at a VCD of 16 million cells/mL in two of the cultures (LP6, LP7). The monitoring and execution of the glucose shifts at the precise VCD were carried out by a Lucullus® embedded process control operation. Lucullus® ensured that the concentration shifts were synchronized properly and initiated independent of human involvement, thereby eliminating any possible user error.

Each of the cultures appeared to reach very similar peak VCD. Although the RMSEP values for VCD demonstrated a higher reported overall number and greater variability than the RMSEP values for glucose and lactate, a direct comparison is inappropriate due to different measurement scales and units. Furthermore, the RMSEP values calculated before reaching peak VCD showed little variation.

The RMSEP values for glucose and lactate revealed that the NIR sensing and MPC with the BR1000 bioreactors performed well enough to provide good estimates for glucose and lactate concentrations consistent with the actual off-line determined measurements. The RMSEP values ranged from 0.320, representing the closest observed alignment (LP7, Lactate), to 0.800, representing the poorest aligned case (PP4, Lactate).

Interestingly, the LP7 (1 g/L glucose) bioreactor displayed the highest VCD but the lowest total yield of monoclonal antibodies. The other two cultures, PP4 (3 g/L glucose) and LP7 (5 g/L glucose) both achieved about 20% greater total yields. It is also noteworthy that the feeding regimen employed was using a 28% glucose solution delivered in a complete (sterile) CHO cell media preparation. As such, cultures maintained at a higher glucose concentration were provided with greater feed volumes of glucose and all fresh nutrient components, ending with the greatest ﬁnal total volume (LP6, 5 g/L glucose, 3273 mL).

Based primarily on the RMSEP values of glucose and peak VCD, it can be concluded that the bioreactor performance of the three BR1000 units was consistently good overall, and variation in the observed ﬁnal yield is likely not an artifact of glucose feeding or bioreactor-induced cell growth discrepancies.

This experiment had the dual purpose of being both scientiﬁcally objective and subjective. The objective purpose was to study and optimize glucose requirements for maximal monoclonal antibody productivity. The subjective purpose was to explore the potential beneﬁts provided by combining the use of multiple BR1000 bioreactor units with the process information management capabilities of Lucullus®.

Regarding the glucose optimization, the highest IgG yields were found for cultivations at 3 g/L to 5 g/L glucose after peak VCD in stirred tank fed-batch culture using the BR1000 bioreactor systems. The possibility of any qualitative differences between the monoclonal antibody produced at these concentrations was not explored, especially with respect to any antibody CQAs. Typical CQA might include glycosylation proﬁles, charge variant proﬁles, or other biochemical parameters. From the daily collected samples, aliquots were measured (i.e., monoclonal antibody titer, VCD, glucose, lactate), and some material was frozen for possible future analysis (TBD). Until such time that the samples can be further characterized, it is reasonable to conclude that a consistent concentration of 3 g/L glucose is optimal and more economical for the cultivation of the K1SP CHO cell line to maximize monoclonal antibody production.

Regarding the more subjective assessment of the Lucullus® empowered BR1000 bioreactor systems, the following can be concluded: